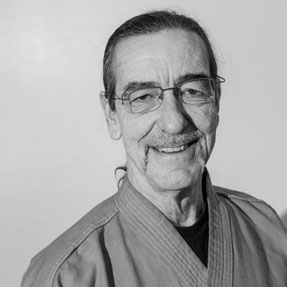 My lifelong journey in the Martial Arts

Echoing Frank Hargrove, GM, “ I am a karate instructor”,  which in fact… is all I ever wanted to be.

Like many others from my generation, I was thrilled and in awe of the martial arts in the media: The Avengers, Bond, Wild Wild West, The Man from Uncle, and of course, Green Hornet.  I was not aware that you could actually study these fascinating moves. I began my journey. I am not special, not the toughest, not the most talented, I train, compete, and share: I am a karate instructor.

• 1987 Coordinator for TKD at the United States Olympic Festival

• 1991 he was promoted to the rank of 6th degree Master Instructor by Duk Gun Kwon,  GM

Bill  Osterholt has competed in Karate, Tae Kwon Do, and Judo competition, winning over 200 awards,  including overall Kata champion for North Carolina in 1982.

Bill Osterholt was on the staff of Jefferson Day School in Winston-Salem.  JDS specialized in children with learning differences. He taught the martial arts and social studies at JDS from 1999 to 2010.

Bill has promoted over 110 students to black belt ranks, 24 to 2nd degree, 7 to 3rd degree,  5 to 4th, 2 to 5th and a 6th degrees.   All black belts are instructed to teach as part of their training, and seven of the black belts have opened their own classes.

Deciding to return to school, he enrolled full time in 2010 as a 55 year old freshman. Bill Osterholt has earned a Master of Arts in Teaching from Lenoir-Rhyne University – 2017,  BA in history from Guilford College w/minors in religious studies and education -2015, and AA from GTCC where he studied  astronomy, history, literature, and religion- 2015.

The Greensboro Karate Institute’s American Karate System is a modern art taught with today’s practitioners in mind but focuses on traditional values.  This includes practicing the physical aspects of Kata,-pre-arranged forms, Waza-self-defense sets, and free-sparring- Kumite.  Karate is also the practice of Kime focus uniting the physical movement, breath, and complete concentration towards a positive goal with a persistent attitude.

All my life I have strived to be a good karate-ka.  I chose to dedicate myself to be a karate instructor. To teach is to have the desire that your students learn and surpass you in your art. I have been blessed by the commitment of my students.

I Do Not Choose to Be a Common Man,

It is my right to be uncommon—if I can.

I seek opportunity—not security. I do not wish to be a kept citizen, humbled and dulled by having the state look after me. I want to take the calculated risk; to dream and to build, to fail and to succeed. I refuse to barter incentive for a dole. I prefer the challenges of life to the guaranteed existence; the thrill of fulfillment to the stale calm of utopia.

I will not trade freedom for beneficence nor my dignity for a handout. I will never cower before any master nor bend to any threat. It is my heritage to stand erect, proud and unafraid; to think and act for myself, enjoy the benefit of my creations and to face the world boldly and say, “This I have done.”   Dean Alfange

This is what it means to be an American