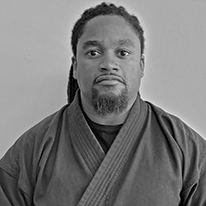 Mr. Danny Antoine, the 2002 Men’s Flyweight Sparring Division World Champion and the 2021 Legends of the Carolinas Martial Arts Hall of Fame inductee, is a 6th Degree Black Belt with more than 25 years of martial arts experience. Over the course of his career, he has worked to embody the defining characteristics of a martial artist, both on and off the karate floor, as he raises the next generation to believe in themselves, achieve their goals, and embody those same characteristics in all areas of life.

Antoine’s introduction to the martial arts came by way of Kung Fu movies. Inspired by what he saw on screen, he thought, “even if it’s not all real, there has got to be a way to get my body to do some of what theirs does!” Added to his on-screen motivation was a longing for purpose. He spent much of his early years struggling with a sense of inferiority and was looking for a way to overcome his fears and achieve greatness. His first opportunity to learn karate came at 12 years old while living in Haiti, and though it was short lived, it lasted long enough to have him “hooked”.

In 1994, Antoine got his next opportunity. Now living in Deltona, FL, he located an American Kenpo School about 20 minutes away from his home, got a job, and bought a motorcycle so he could afford and have transportation to his karate classes. That year, he started his studies under Ken Miller and Jason Mummaw and competed in Central Florida area tournaments eventually winning 1st place in fighting as an under belt at the U.S. Open. He earned his 1st degree black belt in 1997 with instructor Jason Mummaw under Owner and Head Instructor Ron Marcarelli. The test was conducted by Karate Connection IKCA’s Mr. Vic Leroux. Shortly after earning his black belt, Antoine moved to Franklin in the beautiful mountains of western North Carolina where he opened Danny Antoine’s Martial Arts Academy and lives to this day.

Mr. Antoine has been blessed with parents and mentors who poured into his life and his martial arts career. Shortly after moving to Franklin in 1998, he met two of his wonderful parents, Bruce and Cathy Alley, who took him into their family and raised him as an adult, helping shape him into the man and martial artist he is today. Also that year, Antoine would meet two more parents of his, Jerome “Magic” and Ellen Johnson. Mr. Johnson, a renowned Martial Arts Hall of Fame member and 9th Degree Blackbelt, also worked with Antoine as a trainer and coach ultimately leading him alongside his mother Cathy to his 2002 World Champion title.

It was Mrs. Alley who initially approached Mr. Johnson at the 2001 Battle of Atlanta to come alongside her to help take Antoine to the next level. Mr. Johnson remembers that it was the “sincerity in her eyes” and her statement of, “he will listen to you” that made the decision for him. From that point forward, Mr. Johnson took Antoine under his wing as coach and father.

For the next year, Mrs. Alley worked with Antoine on the mental aspects of fighting while Mr. Johnson coached Antoine on the regional tournament circuit. Mr. Johnson recalls that Antoine “was very receptive to coaching” and that aside from some minor “technique tweaking”, the bulk of his training involved helping Antoine understand that he belonged. Once the technique, mental training, and confidence clicked, Antoine became unstoppable.

Between 2001 and 2002, Antoine dominated the sport regionally and nationally, successfully competing across weight classes and winning the respect of nationally renowned martial artists. Antoine established an impressive win ratio, winning the majority of fights that he competed in. In a year’s time, Antoine placed third in the National Black Belt League’s World Championship Super Grands in Hollywood, CA, and went from not placing in the 2001 Battle of Atlanta to winning overall in 2002.

Mr. Antoine continued to compete in every local, regional, and national event that he possibly could after his Battle of Atlanta win. In November of 2002, he again competed in the Super Grands, eventually winning 1st place in his division, securing the 2002 Men’s Flyweight Sparring Division World Champion title.

From 2002 to 2012, Antoine continued to compete, both regionally and nationally, maintaining his impressive win ratio and taking home more wins than he can count. He fought for several national teams and won every tournament in North and South Carolina that he competed in.

After suffering an injury that nearly paralyzed him in 2012, Antoine has spent the following years pouring into youth and adults in his community and across the nation as an instructor, community member, and man of faith. Antoine often tells people that God used teaching the martial arts and competing in fighting to save his life from absolute destruction. During those years, more was developing for Antoine than just his physical abilities. Through the intervention of Christ, the consistent “fights” of the anxieties of life both on and off the karate floor, the men and women who invested into him, and the lessons learned through the ups and downs of business ownership, he learned the physical, mental, and emotional characteristics needed to be a true fighter.

Echoed by both Antoine and Mr. Johnson, “the kicks and punches are such a small part of what we do”. For Antoine, why you fight, how you fight, and what you learn from those fights are the defining characteristics of a true martial artist. A true martial artist is not just one who performs well in the ring, but is also one who has taken what they have learned and applied it to their life lived.

The name that Antoine has established for himself, both as a martial artist and as a man, proceeds him in his sport across the nation. Mr. Johnson once said, “Danny Antoine is a champion because of the way that he carries himself, in and out of the ring, with dignity and honor.”

Tony Young, a 7th degree Black Belt, the National Super Light Weight Karate Champion for 19 consecutive years, and a major inspiration for Antoine, has gone on the record to say, “[Danny] is an awesome person and martial artist. His passion for teaching martial arts is demonstrated well in his students’ performance and conduct. His leadership as a husband, father, karate school owner, and instructor is very noticeable in his community and throughout the south. He is very worthy to be recognized as one of the best competitors, instructors, and martial artists in the south.”

In 2008, Antoine married the love of his life, the beautiful Mary Antoine, and now has a large family of 15 children and 8 grandchildren. Antoine states, “God sent my wife to alter my life’s course in a miraculous way. Together God allows us to parent a parentless generation. I can say that I spend my life becoming one with my best friend. Together, we gave our lives to our Lord Jesus Christ and the rest is history.”

In addition to being a world champion, Mr. Antoine is also an ordained minister, has led a home group church for 12 years, and is a Volunteer Chaplain for the Franklin Police Department. After many years of dedicated service in the Franklin community, Antoine was awarded the 2019 Citizen of the Year Award.