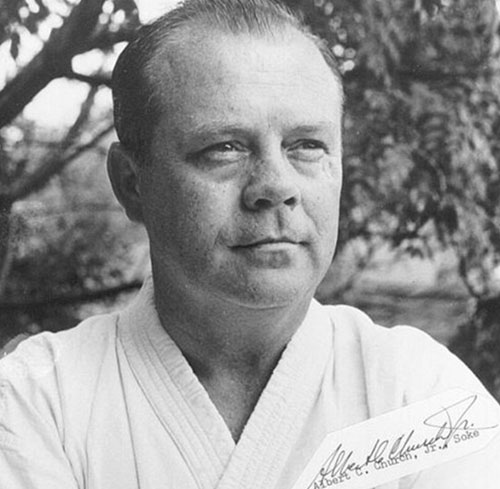 Albert C. Church, Jr. began training in 1939, in a form of Jujutsu based on Yoshin Ryu Jujutsu and Daito Ryu. By 1946, Church sensei began teaching Jujutsu classes at the local YMCA. He continued this until joining the U.S. Marines in 1948.

Albert C. Church, Jr., sensei began training in So Rim Sa Churl Kwon Do (Bup) in Korea while stationed there for the Korean conflict in 1950. At this time the system was a small self-defense discipline similar to Hapkido of today. Church sensei earned the equivalent of a Sandan (Roughly Boxer Level 2) in So Rim Sa Churl Kwon Bup before returning to the U.S. in 1952. Church sensei continued teaching his Jujutsu and the newly learned Churl Kwon Do art after returning to the U.S.

During the early to late 60’s, Church sensei also learned and taught Motobu Ha Shito Ryu Karate and Hakko Ryu Jujutsu under the Hakko Ryu Martial Arts Federation (HMAF). In 1967, Church sensei traveled back to Japan at the request of his Churl Kwon Do instructor (who now lived in Japan) to once again train in the art now known in Japan as Shorinji Tetsu-Kempo. Then in a surprise move, Ki-Oh sensei, due to personal illness and inability to continue teaching his discipline, officially appointed Church sensei as his lineage successor “Soke Dai” (Inheritor Elect).

In 1968, as per the Seishinkai Shihan Committee, Kuniba sensei prepared a scroll recognizing…”Nippon Kobudo Kamishin Ryu, Soke, Albert C. Church…” and a license as the founder-President (Kaicho) of the martial ways organization named Nippon Kobudo Rengokai.

In May 1969, Church sensei returned to the United States where he promptly set forth to develop the organizational structure of the Nippon Kobudo Rengokai.

Albert C. Church, Jr., Soke, continued teaching his art in the Charleston, SC area for the next 10 years until his unfortunate passing in 1980