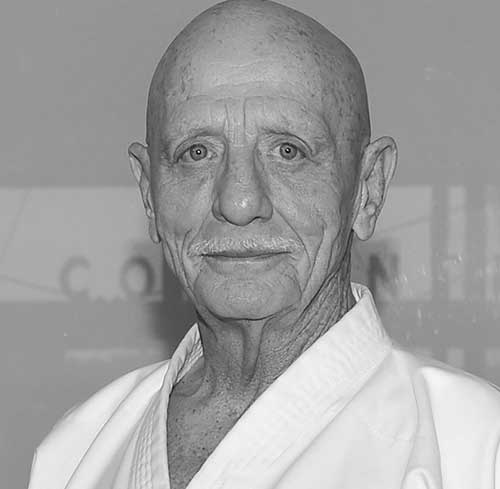 Hanshi Doug Perry began his career in 1946 as an amateur boxer in Charlotte, North Carolina at the age of nine. During his boxing career he participated in 147 bouts in Golden Glove, AAU, and the marine corps. He won state, regional, and national titles and officially retired from the ring in 1959 following the 1960 Olympic trials. At the age of 14, he had the distinction of fighting a four-round exhibition match against bantamweight Champion of the world, Willie Pep.

Sensei Perry started his martial arts training in September of 1956 at Parris Island. Since that time he has had the opportunity to train under Hanshi Tatsuo Shimabuku in Isshin-Ryu Karate-do at the old Agenda Dojo in Okinawa. He has studied with Kyoshi Bill Hayes of Shobayashi Ryu, one of Hanshi Eizo Shimabukuro’s senior students. The karate relationship and special friendship has lasted for over 30 years. While stationed in Okinawa, Kyoshi Perry had the additional honor of interacting with Sensei Kanei Uechi of Uechi-Ryu and Sensei Takemyoshi of an Old Okinawan Family System.

During 1974 to 1975, again in Okinawa, he studied with Kyoshi Jiro Shiroma, a senior student of Hanshi Shuguro Nakazato. Since that time he has been a student of Hanshi Nakazato.In 1997 Kyoshi Doug Perry recieved the rank of Hachidan from Hanshi Nakazato and was appointed to represent the Shorinryu Shorinkan Kyokai in North America. Kyoshi Perry presently operates a small Dojo in Hendersonville, NC.