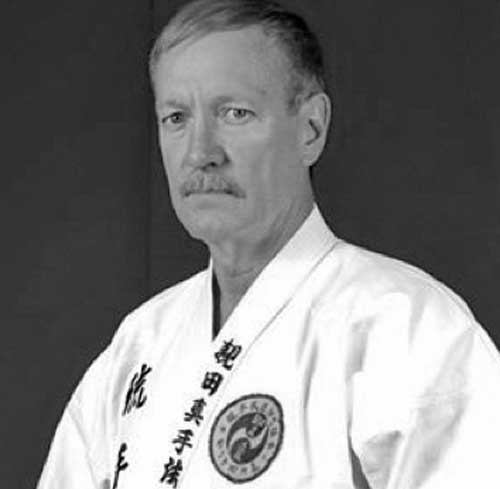 Jim grew up in rural South Carolina, on the out skirts of Columbia. His first foray into martial arts started when a new Boy Scout Master, George Lawson, joined their troop. He was a former marine who held a black belt in judo. George added boxing and judo to the scouting curriculum. That introduction started his lifelong pursuit of martial arts.

In 1963, Jim began a daily regimen of training with his friend, Gary Shull. George Lawson had moved, so they had to find books about karate to enhance their knowledge. They trained year round, mostly outside, even in the winter, punching and kicking frozen sand bags.

Jim was inducted into the army in 1968. After completing basic and advanced training, he was sent to orientation for Far East duty. Jim’s assignment was to the 2nd Logistics Command at a base near Naha, the capital of Okinawa. Being assigned to Okinawa, the center of martial arts was a dream come true. He arrived in Okinawa on Christmas Eve of 1968.

Jim started looking for two things, a place to train and a place off base for his wife Sherry to live. At the end of January, he found a house very close to the base. With that out of the way, his search for a dojo intensified. One day at work, he saw a fellow soldier practicing kata. Jim inquired about the location of the dojo, thinking they could share a ride. To Jim’s surprise, the dojo was only a few blocks from his house.

It was Jim good fortune to have found Taika Seiyu Oyata’s dojo. The dojo fee was six dollars a month. Training was three to four hours a day, seven days a week. Being on military pay, this worked out great for Jim, giving him something to do every day, without a lot of expense. To say training was hard would be an understatement. One day after breaking his toe and splitting the toenail in a sparring match. Jim was ready to stop the match but Taika Oyata merely looked up and said “You still have good foot.” That inspired Jim to a new level of training.

After returning to the United States in June 1971, he started teaching friends and neighbors in the back yard. Shortly thereafter, he opened a small dojo in Barnwell, SC. He kept a dojo open in Barnwell until 2004, even though he moved to Columbia in 1997. Then Jim opened a dojo at 372 Riverchase Way in Lexington.

Jim traveled the world sharing his love for karate and his style, RyuTe. He taught in seminars in
Israel, England, Poland, Ireland, and Okinawa. He also taught in countless seminars in the United States. He was known for his dry wit, suburb timing, killer kick and fast hands. At his passing, he held the rank of 9th degree black belt.