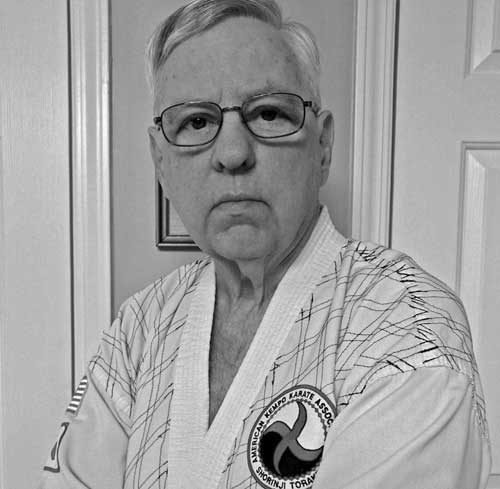 James Ronald Cherry (J. Ron), Hanshi/Shodai Soke, is the founder of the American Kempo-Karate Association, currently headquartered in Charlotte, NC. Its relocation from Charleston, SC, occurred in 1991. The system, Shorinji Toraken Do Sogo Kempo Jutsu, is a composite art, steeped in a rich history of the oriental arts passed down through the generations. It also includes experiential knowledge gained by Cherry as a result of his martial arts studies with various instructors, senseis, and masters, including Sensei James Clements and Masters Takio Yamura, Chung Koo Kim, Tae In Yun, and Grand Master Albert C. Church, Jr.. Many of these instructors were trained in the Orient, and several of these instructors taught Cherry as a private student.

J. Ron Cherry was born in 1947 in Mooresville, NC and began his first martial arts instruction at the age of 7 in Judo. His instruction extended for three years. About 1960, Soke Cherry became interested in Karate Do after attending a demonstration. He sought out Sensei James Clements from Statesville, NC and who had trained in the Orient. Sensei Clements was a black belt in Shotokan Karate and a boxing instructor. Sensei Clements’ instruction was strictly for self-defense and not tournament related. However, Cherry did participate in the tournament circuit for a short period of time. He excelled under the instruction of Sensei Clements and was one of the first brown belts promoted to that rank by the Sensei.

As a student at Oak Ridge Military Institute, Oak Ridge, NC, Cherry adapted well to the military life. Because of the school’s location, he was led to seek out further martial arts instruction in order to bring the arts to the campus. He located Tae In Yun, a sixth degree black belt in Tae Kwon Do, and he was successful in bringing Master Yun to the campus to begin a martial arts club. Cherry also joined the America Karate Association led by Master Chung Koo Kim, the instructor for Master Yun. He continued his training with Master Yun after his high school graduation and during his attendance at Wingate Junior College near Charlotte, NC. It was in Charlotte that Cherry met and began training with Master Takio Yamura in oriental weapons (Kobudo). His intensive study with Master Yamura lasted for two years.

In 1969, Soke Cherry began pharmacy school at the Medical University of South Carolina, in Charleston, SC. He continued his martial arts instruction by training with area martial artists. Cherry was drafted during his time in pharmacy school (1971), was sent to Ft. Jackson for his basic training, and then was assigned to Ft. Devens, MA. Ft. Devens served as the home base for the 10th Special Forces. While there, he met and trained with many martial artists who were members of the 10th Special Forces. Another contact for training was Al Hawksford, a practitioner of Tae Kwon Do. Cherry and Hawksford began a school off base, which was open to the public. Cherry received an Honorable Discharge from the Army in 1973, and returned to the Medical University to complete his pharmacy schooling. He graduated from MUSC in 1975 and was awarded a Doctor of Pharmacy title in 1982.

After his return to Charleston, Soke Cherry met Professor Albert C. Church, Jr., Grand Master of a comprehensive martial arts system inherited from Kim C. Whang (Kooh C. Kim). Cherry soon became a personal student of Professor Church. In 1975, he became the Chief Examiner for the Nippon Kobudo Rengo-Kai (NKR) and the American Hapkido Karate Federation (AHKF). During this time period, Professor Church became ill, thereby limiting his teaching instruction to a few private students. Soke Cherry was delegated authority as Chief Instructor and Examiner, as well as acting Technical Advisor for all NKR and AHKF dojos in the field. Under the influence of Professor Church, Cherry taught all facets of the system that Master Church inherited from Master Whang. Professor Church unfortunately passed away in 1980, leaving a major void in the system. It was after his death that Soke Cherry, after much deliberation, decided to create the American Kempo Karate Association to enable him to continue to improve and pass on the knowledge so freely given to him by many instructors over the years.

As an extension of the organization, in 1982, Soke Cherry developed and implemented a course entitled Unconventional Personal Combat (UPC). This course was designed for high-risk personnel such as SWAT, counter-terrorism teams, hostage rescue teams, and executive protection agents and others. He was named a civilian instructor at Ft. Gordon, GA and Brenau Public Service Institute to teach this course, as well as other courses.

In March of 2000, Soke Cherry semi-retired from the administration of the American Kempo-Karate Association and named Soke-Dai Ray Ferrell as the Nidai Soke (successor and inheritor) of the Shorinji Toraken Do martial arts systems. The headquarters are located at the Academy of Kempo-Karate in Charlotte, NC where Nidai Soke Ferrell continues to implement the philosophy and improve the techniques of the system.