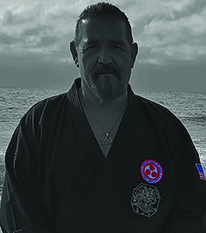 Hanshi McCall is a 9th Degree Black Belt with more than 45 years of living the life of a Karate Lifer. Holds Rank in numerous other systems of Study and has continued to teach for over 40 years on a weekly schedule at his Dojo in Denver, NC. A Martial Arts Hall of Famer, selected and awarded the Sport Karate Museum Dragon Image Fighting award, The Dojo’s Organizations Best Fighter of his Era, The Jerry C. Piddington Natural Fighter Award, United Karate Federation, American Martial Arts Association and many others. But, after all the years of competing, his true love is teaching others the way. Hanshi McCall has 20 Black Belts after 40 years and each one is very special to him. They represent the future of karate and will stand on his shoulders to see further down the Karate road, continue to teach Kaizen, learn about Sisu, and the challenges and wisdom of life. Started and developed “American Freestyle Karate” in 1977 and was inspired by the Olympics Freestyle swimming where you “CAN DO ANYTHING”.

Mr. McCall was awarded multiple Fighter of the Year awards and fighting Championships in his Karate history. While working as a Mechanical Nuclear Engineer, he was competing with the undefeated “Charlotte Warhawks” – Owned and lead by GM Piddington who made sure they had the best and were ready to compete. Mr. McCall was a fulltime instructor at the America Karate Academies and worked at all five of GM Piddington’s Dojos, where he would assist GM Piddington in the daily operations of the schools.
Mr. McCall studied with Mr. Paul Storms (Shotokan Karate), Grandmaster Joe Martin (Li Ki Kung Fu), Ron Wilson (Taekwondo) , 40 years of being mentor and exchanging ideas with his long time instructor Mr. Jerry Piddington (American Shorei-Shorin Karate Do),( American Open Karate). Over the years has trained and exchanged ideas with so many great Black Belts and Karate Pioneers, was co-Captain of the “Charlotte Warhawks” along with Ricky & Randy Smith, Jimmy Horsley and the late great Keith Haflick.
A Student of the Vietnam War and all that comes with that education, including the Purple Heart, that represents his commitment to winning. He always says “When I left we were winning”.

A Mechanical Nuclear Engineer for 7 years with Duke Power and one of the lead System design team engineers in the start-up of McGuire Nuclear plant in 1981
A successful business owner for 30 years in the Marine industry – Denver Recreational Marine, Inc. was a force to be reckoned with in the bass boat market, selling the number one bass boat in the world-Ranger Bass Boats. Hanshi McCall sold his dealership in 2017 and is now enjoying family and life in the DOJO.