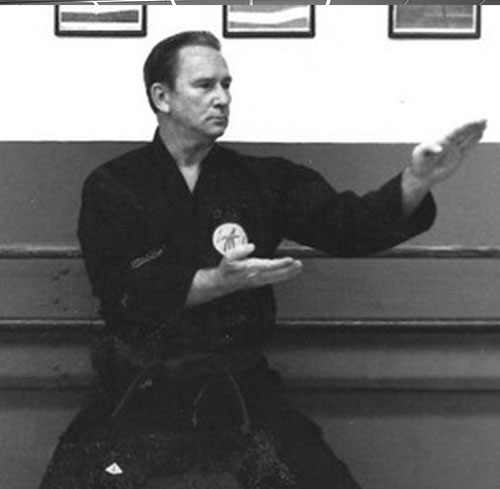 “It is a rough road that leads to the heights of greatness.” – Lucius Annaeus Seneca

He has been called a great man, a wise man, a proud man, but no single definition seems to sum up the characteristics of O’Sensei Virgil D’Arcy Kimmey, Ph.D., and Judan, 10th Degree Blackbelt. For the past 20-30 years, his livelihood was teaching martial arts. Before this, he served in the army, worked as a security guard, a jewelry salesman, a body guard, a stenographer, and other varied professions. His personality was as unique as his job history, but for a man who was quite difficult to “figure out”, he will be missed by thousands of students all over the world.

Mr. Kimmey was born in Maryland in 1920. He grew up during the depression era helping to support his mother and siblings after finishing fifth grade. His father wasn’t around, so he did many odd jobs such as catching snapping turtles and selling them for turtle soup. Times were so tough that he had to stuff newspapers under his clothing to keep warm. He worked briefly at a Chinese laundromat, which ended up being his martial arts introduction. The Chinese workers would practice their art, and a young Mr. Kimmey would sneak to watch them. They ran him off over and over again, however they eventually gave in and let him watch. He also sold fruits and vegetables, and at one point had to resort to stealing food. The shopkeeper was merciful and let him work it off, but he remembered the experience for the rest of his life. He lied about his age to get into the army early, was stationed in Germany, and ended up with a Purple Heart after getting shot in the leg during World War II. He recalled his war experiences by describing the horror of seeing people shot and reeling from concussion grenades. After the war, he was stationed at Fort Gordon near Augusta, GA. There, at a local YMCA, Mr. Kimmey began studying Shorin-ryu.

While Mr. Kimmey was a blue belt, the instructor at the YMCA left. Mr. Kimmey took over instruction of the class, but realized he needed more instruction himself. He ending up meeting with Kim Soo Jen during the 1960’s. In return for bringing Mr. Jen over from South Korea, providing him a home and setting up his citizenship, Mr. Kimmey received instruction in Tae Kwon Do. Mr. Jen was a strict instructor and a demanding person. He destroyed some of Mr. Kimmey’s books on martial arts, telling him that he was not to learn from books but from him. He also tended to simply take what he wanted and expected his students to honor his requests. Mr. Kimmey and Mr. Jen eventually parted ways, but Mr. Jen came back to see Mr. Kimmey after he had married Maria. As Mr. Jen was leaving the home, he eyed a chair that Maria had recently purchased and expressed his interest in taking it with him. Mr. Jen soon realized that Maria was not going to put up with his demands. He left without the chair and with a new fear: Maria Kimmey.

Mr. Kimmey met Maria shortly after his first wife had left him. Mr. Kimmey had only his gi and a pair of sandals to his name when he visited a restaurant in Augusta. There, he met Maria. She was from Germany and had still not perfected her English. She worked at the restaurant as a cook. Mr. Kimmey courted her for about 3 months before she finally agreed to go out with him. He had told her that she was a martial artist, and he brought her to see where he trained. Maria must have been confused, because she wanted to know where the canvases and paints were kept. Despite her confusion, she ended up falling in love and marrying him in 1970.

In 1977, Mr. Kimmey taught at “Camp Karate”, where he impressed many people with his abilities: Jeff Smith, Bill Wallace, Joe Corley, Sam Chapman, and Bobby Tucker. Shortly thereafter, he became involved with Zen Shoto Kai Karate under Joseph Ruiz. Sometime before 1982, he was with US TAI Karate Association. Mr. Kimmey didn’t like to discuss David German and how he got involved with him. However, since Mr. German and Mr. Chapman knew each other, this may have been his link to the TAI organization.

In 1982, Mr. Kimmey was a 5th degree black belt in TAI Karate. In one of his early black belt tests, he was testing along with about 20 others. After going through the normal testing routine, a gentleman came into the room and informed the group that they were now at the last step of the test. Mr. German was now about to enter the room, and they should form a line. The man told them that when Mr. German entered, he was going to hit each one of them in the face as hard as he liked. The gentleman gave them the option of leaving at this point, since it was quite well known what Mr. German could do to a person’s face. Some of the group chose to leave. The remaining few stood waiting in a straight line. Mr. German then came out, walked up to the candidates, and tapped each of them gently on the cheek.

Mr. Kimmey, however, was no stranger to tough instruction and testing. He told his students that he wouldn’t teach them the way he had been taught. However, some students insisted that they wanted the experience. Mr. Kimmey took these five students (who paid extra for the experience), and told them they if any one of them quit the “special instruction”, that the special class would be over for all five. On the first day of class, he gave them a small dose of what he went through, which included being hit in the stomach over 50 times and receiving the same blows the very next day. With his own students he was much kinder, yet not one of them wanted to continue the “special instruction”.

Mr. Kimmey was head of the southeast region and of Europe for the TAI organization. He earned his 10th degree black belt in TAI Karate and was also inducted into the Yudansha Hall of Fame on May 25, 1988. This is also when he received his Ph.D. in Martial Sciences. Both of these are the highest honors that can be received, yet Mr. Kimmey remained a man who was satisfied with simple pleasures in life. He considered getting his GED, but eventually decided against it.

In fact, Mr. Kimmey was extremely well-read. He was curious by nature, and kept clippings of articles that interested him. He kept up with trends such as gas prices, researched religion and the bible, and liked to find the “hidden facts” in history. He was fond of the American Indian and had some as friends. He also dabbled in coin collecting in the last years of his life. He was opinionated and liked to argue. However, he didn’t like to talk about his health, mentioning it only when necessary and then only in passing. Mr. Kimmey was a proud man who found it difficult when his body began to tire. In 1998, Mr. Kimmey retired from teaching at his North Augusta Dojo.

With his students, Mr. Kimmey was a true perfectionist. He demanded respect and expected his students to do as they are told. While he realized that problems would arise in getting too close to students, he still became involved with many of his students’ personal lives. The reason he did so is because he believed that his students were a reflection of himself, and he had a clear idea of how they should conduct themselves. Of course, this caused some tension, as Mr. Kimmey was difficult to please. He could be angry and mean at times, and some just couldn’t deal with it. Mr. Kimmey was not one to mince words: he told you exactly how he felt whether it was nice or hurtful. His purpose, however, was to benefit the student. He tried to make them better in what he thought was the proper way. He would also test them to see when they would break. Being rough on them was his way of making them prepared.

O’Sensei Kimmey has affected countless lives and he will continue to do so through his many students. While he was truly a great man, he was also human. Even those close to him had difficulty in trying to “figure him out”. However, there is no doubt that he was well-respected and honored. Today, as students leave his Dojo in North Augusta, they bow to a photo of him. He will be remembered and missed by many. I wish I had had the chance to meet him before his passing. I feel very lucky to be able to meet him through his students.