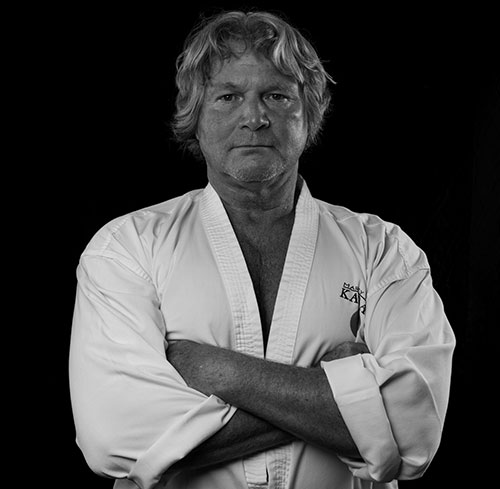 Born and bred in Belton, SC, Marty Knight is a two-time world champion and three-time national champion with numerous other titles under his black belt, but he didn’t begin his athletic career in karate. Having run track and field in high school, Marty was set to run on scholarship for Anderson College. The summer prior to his freshman year, he became interested in karate after seeing the 1971 film Billy Jack. He soon began attending a local Dojo for fitness and knew right away that he wanted to be a fighter and a teacher.

Mr. Knight would go on to earn his black belt in 1975 while training under Keith Vitali and Mike Genova. He has travelled the world to compete in such countries as Trinidad, China, and was named most valuable competitor of the Chuck Norris team that travelled to Russia. Additionally, Mr. Knight has served as a body guard for well-known entertainment icons including Garth Brooks, Guns N’ Roses, and Bon Jovi.

Mr. Knight opened his first karate school in 1978 and has been teaching ever since. His training has produced other world champion fighters such as Rick Lee and Nicki Carlson Lee. In his own words on his profession: “I love my life. I love going to work. I love the lifestyle I lead. It keeps me physically fit and around wonderful people.”

In February of 2016, Mr. Knight wouldn’t even let a knee-replacement surgery keep him off the mats. Coaching from a chair, he continued to drill his students until he was back on his feet again, delivering his famous lightning-fast back-fists. Teaching the importance of dedication, diligence, and self-discipline, Marty leads by example and continues to produce champions.