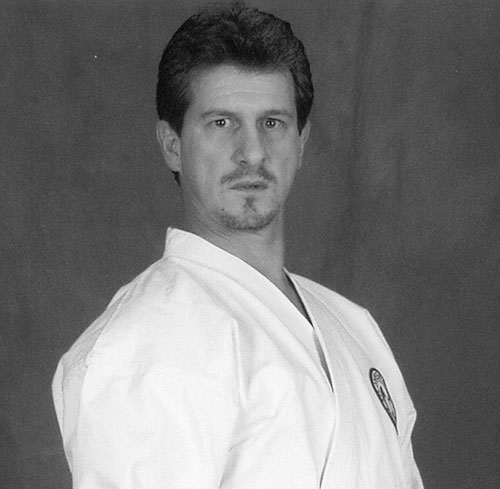 Ricky and his twin brother, Randy, from China Grove, North Carolina, were named The Gold Dust Twins by Karate Illustrated in 1977. Ricky was ranked 3rd in the United States and 10th in the World in Professional Kickboxing.  The highlight of Ricky and Randy’s exciting career came in 1978 when the duo won the Double Pro-Team (Tag Team) Kickboxing Championship of the World, sanctioned by the National Karate Association. This fight is still considered by many as one of the most action-packed bouts in the history of Full-Contact Karate. The twins also fought as super lightweights for the world famous undefeated five-man kickboxing team, The Charlotte War Hawks, alongside Danny McCall, Jimmy Horseley, and the late Keith Haflick.

Randy had an extremely powerful straight right hand punch and was properly named The Bullet. Ricky had lightning fast hand and feet combinations and was nicknamed Flash after knocking out his first opponent in a record setting seventeen seconds. The Gold Dust Twins were two of the most colorful and popular fighters of their era. (Randy is pictured above performing a roundhouse kick on Ricky – 1977)

Ricky, and his wife, Edie, currently operate a karate school in Salisbury, North Carolina. In 1976 Ricky and Randy opened their first karate school in China Grove and began their teaching career. The twins are founders of SideKick Karate Schools and have produced over 150 black belts. Their black belts who presently own schools are Robert Taylor with Traditional Martial Arts of China Grove, Jeff Dixon with SideKick Karate of Concord, and Madison Hobbs with Hobbs MMA. Ricky is Headmaster of American Open Karate System and Chief Instructor of the American Karate Academies National Association chartered by Hanshi Jerry Piddington. (Ricky is pictured on the right performing a flying side kick on Randy)

Ricky and Randy have had the honor of studying and ranking under some of the best karate teachers and competitors in the history of martial arts, including Jerry C. Piddington, the late Ridgely Abele, Troy Price, Vitus Bilking of Denmark, the late legendary Joe Lewis, David A. Adams, and the late Gary Basinger.

Their first karate teacher was Gary Basinger (pictured on the left in the center of Randy and Ricky – 1975). The twins joined Gary’s school in 1974 and traveled the sport karate circuit for years under his tutorship racking up wins all over the Southeast. “Gary was one of the best sport karate competitors with more grand championship trophies than anyone I know,” said Randy.

In 1976 the twins received their first black belt from David A. Adams, a pioneer of karate in the Southeast. The brothers also began their full-contact karate profession under his leadership. In the next few years, Dave coached the twins to a top ranking kickboxing career as they fought some of the best kickboxers of their era, including world champions Tony Lopez, Richard Jackson, and Vernon Mason. Ricky and Randy currently hold 8th degree black belts in American Jee Do Kwan under Mr. Adam’s American Jee Do Kwan Association. In 2005 the twins also starred in one of Dave Adams’ films, Angel with a Kick, along with the late martial arts legend Thomas C. LaPuppet.

The Gold Dust Twins’ accomplishments have not only been in competition, but teaching. In 1994 the twins were inducted into the World Martial Arts Hall of Fame as Instructors of the Year and Ricky also won the Kata Grand Championship in the World Martial Arts Hall of Fame Tournament that year (pictured on right). “We feel that we received our passion for teaching from our mother, who was a 12th grade English teacher for 34 years,” said Ricky. In 2003 Ricky and Randy were also inducted into the Living Legends Sport Karate Museum as Living Legends of Sport Karate.

As promotors of sport karate, Ricky and Randy have promoted kickboxing and karate tournaments since 1981 Their televised kickboxing productions, held in China Grove, included some of the best fighters in history of the sport, such as Bill “Gentleman” Morrison, Johnnie “Superfoot” Davis, and the infamous Joe Lewis. In 2003 Ricky and his wife decided to give back to the martial arts community by honoring some of the great legends of sport karate. They promoted an event, Living Legends of Sport Karate, held in Charlotte, North Carolina, honoring the world’s greatest fighters of all-time, including Jeff Smith, Jerry Piddington, Don “The Dragon” Wilson, Bob Wall, Joe Lewis, and Howard Jackson (pictured to the left in respective order). In the same event, Ricky and Randy’s father, Gene, was honored with the Living Legends Pioneer Award. Since 2004, Ricky and his wife have given back to their community by founding and promoting The Bushido Warrior Sparring Tournament with special guest such as: Bob Wall and Howard Jackson. The event has raised over $100,000 for Godstock, a local organization that helps families with critically ill children. The Smith’s are still kicking, promoting annual karate tournaments through their SideKick Karate Schools.

In 1989 Ricky and Randy gave their hearts to Jesus and began to serve God. Ricky traveled all over the country with a well known youth evangelist, Eastman Curtis, out of Lakeland, Florida and Randy served as a youth pastor in Tallahassee, Florida. In 1991 Ricky and Randy founded Double Impact Ministry Team using their martial arts demonstrations as a tool to reach the youth of America.

Ricky and Randy also have a love for film making and a vision for martial arts films made for family entertainment with a Godly message of hope. Their film resume includes: Angel with a Kick – a 2005 Dave Adams Film starring Thomas LaPuppet with Ricky and Randy Smith, The Quest – A 1996 Universal Picture starring Jean-Claude Van Damme and Roger Moore which Ricky was a stuntman and portrayed a pirate (pictured to the left with Jean-Claude Van Damme on the left), Bloodsport II: The Next Kumite – A 1996 FM Entertainment Production starring Pat Morita (Mr. Miyagi) and Daniel Bernhardt which Ricky portrayed a fighter in the Kumite (pictured below with Jerry Piddington on the right and Mr. Miyagi in the center), and The Russian Godfather – A Hollywood Star Entertainment Production starring Jeff Conway which Ricky and Randy were stuntmen and portrayed bodyguards.

Ricky and Randy are the authors of a Volume I, II, and III series of karate books. The first hardback edition titled, American Open Karate System Illustrated Training Manual, will consist of 650 pages with over 6,500 drawings illustrating every technique in American Open Karate. “I own a couple of O’Sensei Robert Trias’ publications called, The Pinnacle of Karate, along with Ridgely Abele’s, Karatedo, Art-Sport-Science, and Troy Prices’ Combative Kyusho-Jutsu Training Guide, and the drawings in their books inspired me to draw the techniques for our book,” says Ricky. “Drawings are traditional and timeless.” Ricky and Randy have worked on this project since 1979. “This book is our legacy to American Open Karate and a gift to my teacher, Hanshi Jerry Piddington,” adds Ricky. “This will be the most complete book on martial arts ever written,” says Mr. Piddington. “And I am proud to endorse it.”
Ricky and Randy have also produced several martial art training videos with their company, SideKick Karate Productions. Their first instructional video titled, Get Started in Karate, was endorsed by Joe Lewis and Jerry Piddington in the introduction. Also, they produced an instructional video titled, Living Legends Sport Karate and Kickboxing Seminar, featuring four of the greatest legends in karate and kickboxing history: Joe Lewis, Don Wilson, Jeff Smith, and Howard Jackson. Their company has also produced and directed several television commercials.

In 1998 Ricky and Edie, along with the help of Randy founded one of the premeir 5K road races, The China Grove 5K Challenge. The Smith’s decided to raise the bar in the size of trophies given in 5K runs, giving out 6-foot trophies to overall winners along with substantial cash. This attracted world class runners to their hometown event. Edie, Ricky’s wife, an elite runner herself, explained, “I wanted to give back to my passion of running and this race was a good mix with the martial arts community.” The First Annual China Grove 5K Challenge hosted over 540 runners the first year and remains a huge success to this day. The race is now hosted by the local YMCA and proceeds go to underprivelged kids to attend camp.

Ricky and Randy grew up at their Dad’s 43 acre recreational park, Happy Lake. There they began to lifeguard and learn work ethic at an early age. Randy still has lifeguarding in his blood. He currently works for Lack’s Beach Service and manages ocean rescue and water safety in Myrtle Beach, South Carolina. He received the 1997 Rookie of the Year Award and was honored with the 2009 Carl D. Righter, Jr. Horry County Beach Front Veteran Meritorial Service Award.
You can visit Ricky and Randy’s website at www.sidekickdojo.com or contact them at P.O. Box 922, China Grove, North Carolina. Their email is skkarate@aol.com.